Gramex is the collective management organisation for recorded music in Finland.

Gramex wants to make using music easier and offers licensing services that enable the usage of phonogram music and music videos. Gramex collects remunerations to performers and producers in Finland and around the world.

If you are a performer or producers of music or if you need licenses for phonogram music, copyright society Gramex is at Your service. Gramex has more than 60 000 rightsholder client contracts with performers and producers. Gramex remunerations are collected from approximately 31 000 premises such as restaurants, stores and gyms and about 200 media licensing users.

Service for artists and producers

Gramex is a non-profit organisation, governed by the representatives of artists’ and producers’ organisations. Gramex delivers almost nine tenths of the collected payments to the clients and music promotion activities. The rest is used for collecting, administering and delivering the remunerations.

If one has produced a record or other kind of phonogram or has performed on one as artist, one can become a client of Gramex.
By signing a client agreement, a rightsholder authorizes Gramex administer, within the scope defined in greater detail in the agreement, his/her rights under the Copyright Act.

Gramex distributes the remunerations to the rightsholders at a subsequent date, as soon as the necessary information for the distribution is available. The division between different rightsholders of the recording is done according to the Distribution rule of Gramex.

In accordance with the Tax Withholdings Act, Gramex withholds taxes in connection with the payment of remunerations. Under this Act, withholding is not made from remunerations paid to a recipient listed in the Advance Income Tax Collection Register. The smallest remuneration to be paid is confirmed by the General Meeting.
By signing a client agreement, a performer or producer receives his/her own code number, i.e. a Gramex number. Correctness of the data given in the client agreement and their maintenance up to date are prerequisites to the distribution of remunerations.

Gramex collects and pays remunerations to rightsholders from Finland and abroad. See list of countries here. 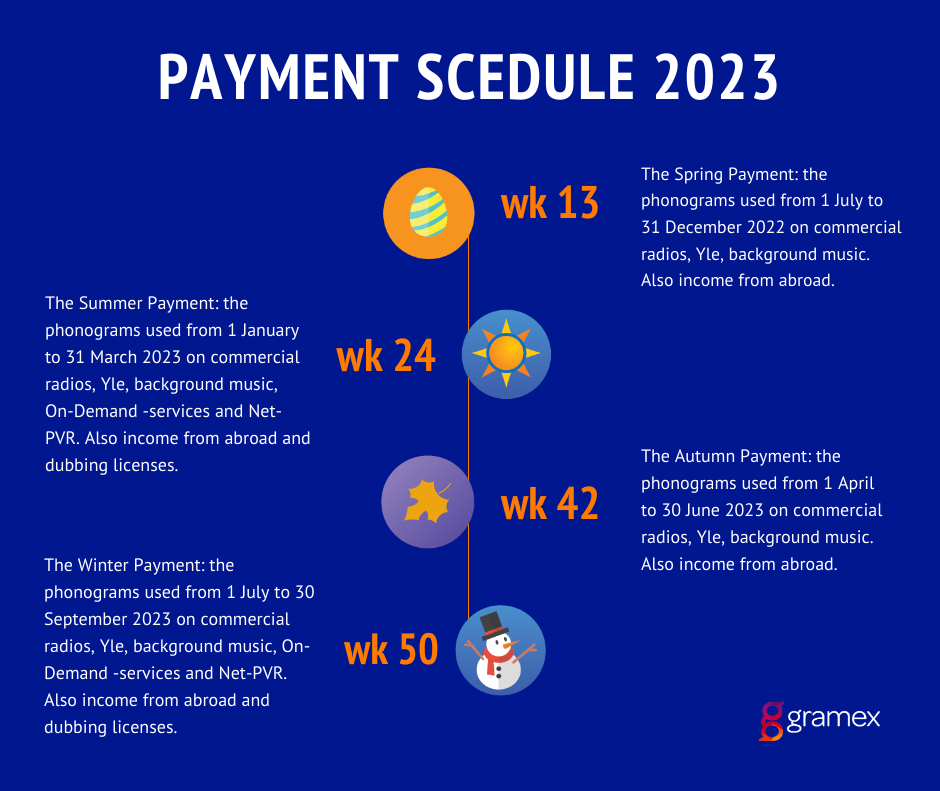 The latest annual reviews and transparency reports contain a lot of interesting information about Gramex activities, management and finances.

MyGramex is a service portal for both performer- and producer customers of Gramex. In MyGramex you can update and check your contact and tax information and see your individual recording information, usage data and distribution statements.
If you are a new user of MyGramex service, you need to register as a user first. After registration, you will receive a confirmation link to the email address you have provided.
In the future, it will also be possible to submit phonogram reports through MyGramex-portal.

Materials are in pdf-format.

Music and music videos in premises open to public

Music and music videos at events

Gramex licenses for public performance of phonogram music and music videos in events open to the public (e.g. fairs, concerts, sport events etc) are sold by Teosto.
> Go get a license at Teosto website

Music at radio, TV- and Internet

Gramex grants licences for the use of phonograms in media such as radio and television broadcasting, internet simulcasting or webcasting and limited use on demand services.
> Contact Elmo Helokumpu or Petri Kiiski,  email: firstname.lastname@gramex.fi

This website uses cookies to improve your experience while you navigate through the website. Out of these, the cookies that are categorized as necessary are stored on your browser as they are essential for the working of basic functionalities of the website. We also use third-party cookies that help us analyze and understand how you use this website. These cookies will be stored in your browser only with your consent. You also have the option to opt-out of these cookies. But opting out of some of these cookies may affect your browsing experience.
Necessary Always Enabled
Necessary cookies are absolutely essential for the website to function properly. This category only includes cookies that ensures basic functionalities and security features of the website. These cookies do not store any personal information.
Non-necessary
Any cookies that may not be particularly necessary for the website to function and is used specifically to collect user personal data via analytics, ads, other embedded contents are termed as non-necessary cookies. It is mandatory to procure user consent prior to running these cookies on your website.
SAVE & ACCEPT
Go to Top